When using a putting robot for testing and research and development, nearly all numbers produced by Quintic Ball Roll, including face angle, face rotation, path, attack angle and low point, record very consistent results with a small range and standard deviation. One of the features of Quintic is to colour code this range to highlight consistency. Within Quintic, ranges recorded using a putting robot are coloured blue. The following table (Table 1) highlights the ranges for the various parameters recorded by Quintic Ball Roll. For a Blue Face angle range, a minimum of six putts are required within a range of <0.5 degrees. 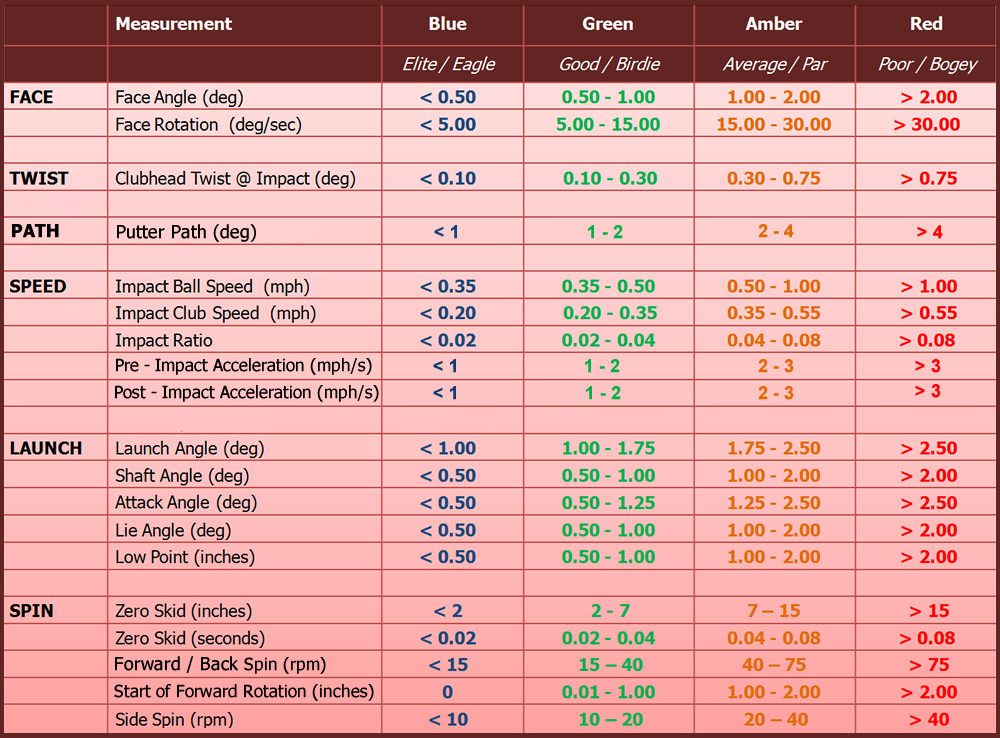 The one parameter, however, that generally has a larger range despite using the robot, is the ball launch angle. This was also noted by Richardson et al 2017 when looking at the effect of dimple error on the horizontal launch angle and side spin of the golf ball during putting. A possible explanation for this is shaft vibration and oscillation caused by the putting robot during transition. Research into the shaft movement while in a putting robot and high speed camera (5000HZ), has shown that the pull back motion of the machine causes vibration and oscillation in the shaft. (Figures 1 and 2)

In the example below (figure 1), reflective markers were attached at regular intervals points along the putter shaft, and their velocities were measured through the transition from the backswing to the downswing during the stroke.

Figure 1. Images displaying the experimental setup: putter in the robot (A),
the seven point reference model used during Automatic Tracking (B),
and digitised trace for seven markers of the shaft and toe (C).

Figure 2. The above graph highlights the velocity of the seven markers
during the putter’s transition and downswing (Blue Vertical line = Impact)

The analysis showed a range in the velocity of the toe end of the putter shaft, most likely caused by the oscillation of the shaft. This change in velocity at the bottom (putter head) compared to the top (grip) would also cause a change in dynamic loft of the face. Ball position and the acceleration profile of the putter could potentially cause the loft to be different nearly every time the putter face makes contact with the ball. Based on the following observations of the shaft oscillating during the downswing, the purpose of this study was to test the consistency of the ball’s launch angle using three different positions of the shaft.

The Quintic Ball Roll system uses a high-speed camera (1080 fps) to measure a variety of parameters. This study was focused on two of these parameters, ball speed and launch angle. A 35″ centre shafted putter (Head weight 355gm) was set into the putting robot (figure 3). The shaft was positioned vertically and the ball position was 1.5cm in front of the resting position of the putter head to create a small positive attack angle. The putter had 3 degrees of static loft (to ensure no surface interaction). The grip was removed for repeatability of the three different attachment points within the putting robot. The three different locations for clamping the shaft to the robot can be seen in figure 4: The top/handle (1), the centre of the shaft (2), and at the point where the hosel enters the putter head (3). The clubhead was released at three different speeds, on a straight back and straight through path in order to create ball speeds of 3, 6 and 10 mph. The same putter and ball was used throughout the study. 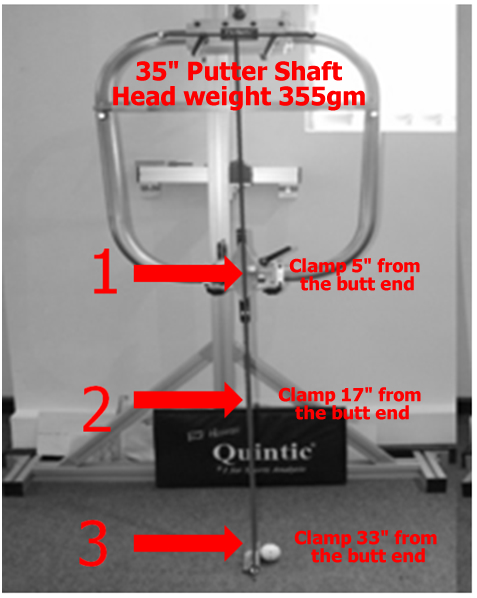 Figure 4: Putting robot in use.

Thirty putts were recorded for each speed and shaft location. The protocol was conducted on an indoor artificial putting surface (Stimp 12). Ball speed and launch angle were recorded for the 3 different speeds and locations using the Quintic Ball Roll System (1080fps).

Tests with putter connected at the grip/top (location 1)
The first step of the study was to test the launch angle with the full length of the shaft clamped to the putting robot – this was 5″ from the butt end of the shaft, replicating the location of the player’s hands on the putter grip.

Tests with putter clamped half way down the shaft (location 2)
At this point the putter was connected at the halfway point of the shaft and the same tests were repeated.

Tests with putter clamped at the bottom of the shaft (location 3)
This series of tests were run with the putter clamped directly at the hosel (as low as possible), meaning in theory, no putter shaft was involved.

At 3mph (low ball speed), the range of launch angle was the highest irrespective of where the shaft was clamped.

The range and standard deviation were more consistent across all three ball speeds when clamped as low as possible to the putter head, when compared to the top of the shaft. Shaft vibration and oscillation is certainly influencing the consistency of launch angle. This is important for the player and coach to be aware of, so they can ensure tempo and transition are as smooth as possible.

Lots of testing and research is carried out using the putting robot, as it is the gold standard for most research involving any form of repetitive putting motion. However, if a test involving the putting robot is focusing on launch angle or something affected by launch angle (forward spin, zero skid, etc.) then results potentially may be influenced by the shaft and location of the clamping of the putter to the robot. Based on the fact that we now know shaft effect is taking place, if a test is to be more accurate then certain parameters can be changed, such as the point at which the head is clamped in the robot, which should reduce the range of the launch angle, and make any research carried out on the robot more reliable and repeatable.

From this study we have learned that the vibration of the shaft can affect the consistency of the launch angle of the golf ball, but we also learned that ball speed has a big effect too. A future study would be to test different putter styles, with a variety of different speeds, to see if the trend remains the same, and see why faster ball speeds seem to create more consistent launch angles.