Investigation into the Effect of Moveable Putter Head Weights

Many modern putters are marketed with movable weights, selling the idea of changing stroke parameters with minimal effort, for improving performance on the greens. Movable weights have been a huge success for driver manufacturers over the past few years. The putting stroke is much slower, so do movable weights have the same effect that they are perceived to be having with a putter? The following study investigates the effects on the club and ball impact parameters when moving weights (0-25 grams) around in the putter head in four different locations. How does moving weight around in the putter head affect the golf ball and club head during impact? There is very little research on moveable putter head weights. What are the practical applications for a putter with movable weights?

The Quintic Ball Roll v4.4 Research system (Quintic, 2019) uses a high speed camera (1080 fps) to measure factors such as ball speed, club speed, side spin and face angle at impact. The same putter head was used for each test. The putter had a factory weight of 366 grams, and a weight of 316 grams with the standard factory weights removed. The putter had four weight slots, front heel, front toe, back heel and back toe. See Figure 1. 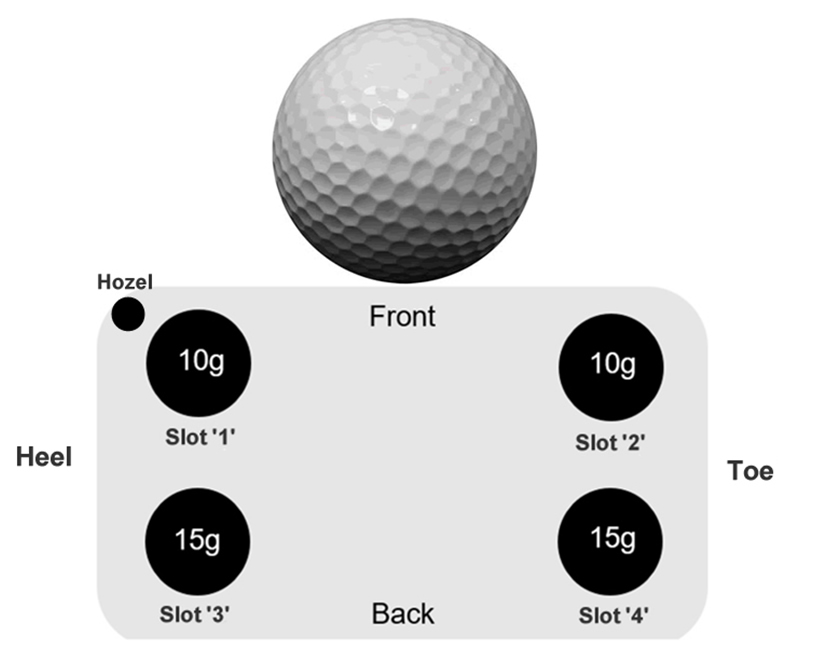 Figure 1: Overhead view of the original factory set up of the weights and
the slots in the putter head.

The mass of the weight options ranged from 5 grams to 25 grams in 5 gram increments. The weights were moved around in all manors of specific permutations, with six generalised conditions; Relative heel weight, toe weight, frontal weighting, rear weighting, extreme weighting and the original factory weight condition.

A total of 72 different weight permutations were analysed using the putting robot. For each specific weight permutations, ten putts were recorded on the putting robot, each with an average ball speed of 6mph ± 0.2. The impact location was constant for each putt: middle (heel / toe) and middle (top / bottom). The average for all ten putts was then calculated per condition. The testing was conducted on an indoor artificial putting surface (Stimp 11). The initial testing was performed with a straight back and through putting stroke, followed by a 2 degree in-to-in putting stroke.

Figure 2: Putting robot in use.

The first result was from the default manufacturer’s set up. This was then used as the control/comparison with the seventy two different weight permutations analysed. The following results were performed with a straight back and through putting stroke. 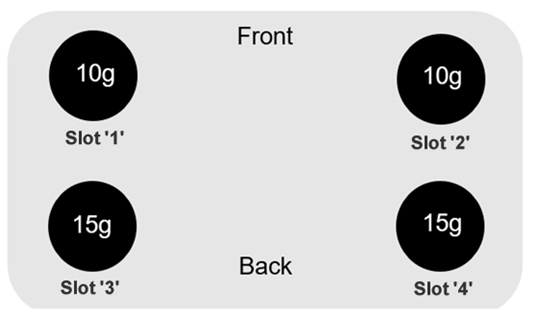 Throughout all the tests the total head weight, regardless of the individual weight locations is reported below and then ranked in ascending order.

These results were drawn from adding six even sets of weights to the front of the head (Slots 1 & 2) in 10g increments from 0g to 50g. The six conditions analysed were as follows:

Changing the weighting on the front of the putter only had, the following noticeable differences. Firstly, as the weight increased towards the front, the attack angle increased from -0.40° to 0.38°. As the attack angle increases, so does the shaft angle 0.08° to 0.24° and launch angle of ball from 2.02° to 2.67°. As a result of an increased launch angle, the distance until the start of forwards rotation also increased from 2.28 inches to 3.45 inches. The average hook spin on the ball also increased as the weight moved towards the front of the putter, although the hook spin remained relatively low. Despite the changes in shaft, launch and attack angle of the putter it was interesting to note that the backspin (rpm) of the golf ball remained consistent throughout all six weighting conditions (-40rpm ± 4).

These results were drawn from adding even sets of weights to the rear of the head (Slots 3 & 4) in 10gr increments from 10g to 50g. The six conditions analysed were as follows:

Weighting at the rear of the club made minimal differences to the shaft, launch and attack angles. The balls performance, notably the point of forward rotation and backspin showed little differences. Furthermore, hook spin remained almost identical for the six weighting conditions.

These results were compiled of many different weighting configuration tests in the heel and then split into above and below 25g combined weighting in the heel. (Slots 1 & 3). Slots 2 (10g) and 4 (15g) were as per the factory setting throughout the heel weighting tests.

Table 4: Side spin (rpm) and the effect of heel weighting.

When weighting the heel the only results that differed from the factory data (along with total weight data that is already reported) was the increase in the hook spin created on the golf ball. As more weight is added to the heel the hook spin increased (≤25g -7.09rpm vs >25g -12.92rpm). This is potentially due to the face twist created during impact and a change in the centre of mass of the putter. The default factory set up had on average -12rpm of hook spin.

These results were compiled of many different weighting tests in the toe and then split into above and below 25g combined weighting in the toe. (Slots 2 & 4). Slots 1 (10g) and 3 (15g) were as per the factory setting throughout the toe weighting tests.

Table 5: Side spin (rpm) and the effect of toe weighting.

When weighting the toe, the only results that differed from the factory data and the total weight data, was the sidespin. Sidespin was similar as an average, however, when weight was increased, the amount of hook spin decreased (≤25g -11.11 rpm vs > 25g -8.97). This is most likely due to the face twist after impact due to there being more mass on the one side of the head and a change in location of the centre of mass of the putter. 45g of weight in the toe resulted in +1 rpm of cut spin. The default factory set up had on average -12rpm of hook spin.

Figure 11: Extreme Weighting (25g in each of the four slots) 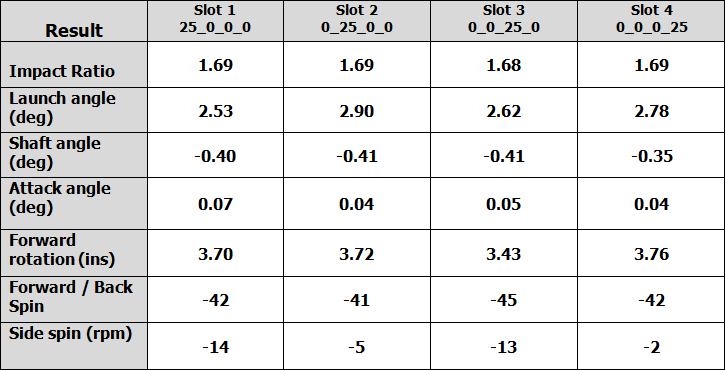 Table 6: Table showing the effect of placing 1 x 25g weight in each of the four slots.

When extreme weighting the 4 slots on the putter head, there was only one clear difference between each slot compared to each other and the factory setting. The differences between each slot were virtually nil; however, there was a significant difference in side spin between when the weight was in a heel slots (1 & 3) compared to when in the toe slots (2 & 4). When in the heel slots, the average hook spin was -14rpm (Slot 1) and -13rpm (Slot 3), however when in the toe it reduced to -5 rpm (Slot 2) and -2 rpm (Slot 4). In some individual putts, the spin impacted on the ball was a slight cut spin +ve value for Slot 4. 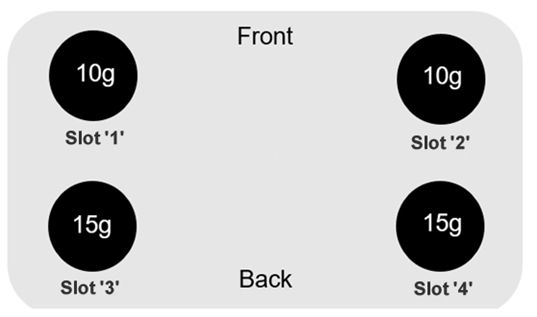 Figure 13: Quintic Ball Roll : Robot Path Summary graph of the two path conditions for the Factory Setting.
Straight back and through (Red) and the 2 degree in-to-in arc (Blue)

Swing weight, in essence, is the relationship between the weight in the bottom two thirds of the club and the top third of the club. From the perspective of the player, it simply means how the club feels through the swing and impact (heavy or light, etc.).

The swing weight of all the 72 weight combinations from smallest to largest were measured using a swing weight scale, and then ranked alongside total weight addition.

Table 8: Table showing the change in swing weight based on the
amount of weight added to the head of the putter

The original head weight with no weights in is 316 grams, with a 28.48% increase (90g) the swing weight changes from C7 to F4 (37 different swing weights!). This is a large difference; moving weights in the club head to potentially solve a stroke issue will subsequently change the swing weight, feel of the putter and the launch characteristics of the golf ball.

Changing the weights in the putter also affected the face balance/toe hang. Maximum weight (50g) was added to the heel and toe and compared to the factory settings to see the differences.

Figure 15: Graphics showing face balance of the putter, with the maximum weight in the toe.

Figure 16: Graphics showing face balance of the putter with the maximum weight in the heel.

Between maximum toe and maximum heel weighting of the putter head, there was a range of 21° in the face hang, hanging more toe down when the toe was weighted and more toe up when the heel was weighted.

Before now, the actual effect of movable weights in a putter head were relatively unknown. This study highlights the effect of moving weights in to different locations of the putter and the result changes measured in the balls launch parameters. In real-life terms, this could be used for several things, for example putter fitting. When someone is fitted for a putter using Quintic Ball Roll, or any other putter measuring device, if a particular person has trouble with high hook spin, then results from this study would suggest that a weighted toe will decrease the hook spin created, all without the player feeling they are changing their stroke or technique. In addition to this, we now know that changing weights effects the amount of toe hang, the swing weight of the putter and potentially even the launch angle of the ball. The overall head weight of a putter is important for the individual. Too light or too heavy and it becomes difficult to square the face consistently at impact.

This information potentially can be applied when somebody is having issues with their stroke, enabling them to feel a difference in their stoke, without having to have a lesson or even change their putter.