BLOWIN’ IN THE WIND…

The wind: we all know it can affect the behaviour of the golf ball on the green, but what science exists to validate our perception and interaction on the golf course? Gi’s resident putting guru Dr Paul Hurrion investigates…

There is no doubt that putting is made more difficult by a strong wind – and especially on a links course, where is generally little in the way of shelter and the greens tend to be undulating and fast. A strong wind can often make it difficult to achieve a good set-up posture and maintain balance, jeopardising the free-flowing motion of the stroke itself. Once the ball is struck the wind then has an influence on where it ends up – and if the wind strength is 20mph+ you can expect some serious issues in terms of your putting performance…

What is the first thing people say when putting in the wind? ‘Widen your stance, you need to create a stable posture…’ My immediate reaction to that is to ask why ever golfer wouldn’t want to be a stable as possible over the ball in all conditions? That’s a bedrock of my teaching in terms of creating a good position at the set-up: a foundation for a solid, repeating stroke.

I have spent numerous years examining the balance points of golfers during the putting stroke, identifying pressure points in the interaction between the shoe and the green, along with body movements during the stroke. Balance is crucial – it’s one of my five keystones to putting, without balance, the pivot point of your stroke is liable to move, and as a result you will struggle to consistently hit the ball out of the same part of the putter each time. If you strike the putt out of different locations, the ball will react differently in terms of spin, launch angle and the speed at which the ball rolls – so how can you hope to control distance. And if you cannot control distance, what line are you going to pick to start the ball on?

The problems just keep mounting, until eventually, it becomes a hit and hope situation. 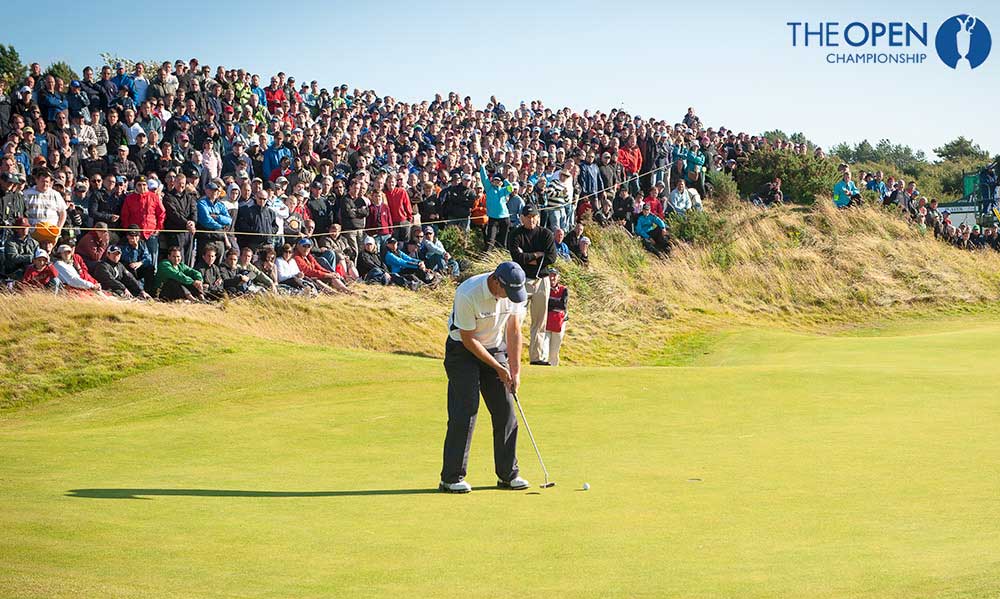 Balance was the first technical change that I made with my long-time student and two-time Open Champion Padraig Harringron; the wide stance that is characteristic of his method is the simplest way to ensure minimal movement during the stroke (measured via a force platform). There is no doubt that Padraig’s ability to adapt to windy conditions played a significant part in his Open victory in 2008 at Royal Birkdale. He certainly played in the tougher side of the draw on the Thursday & Friday, and among a number of incidences he recalls one putt in particular, on the par-three 12th hole on Sunday afternoon, “That would have been right edge normally, but due to the strong wind, it was outside left”… Needless to say he holed it! 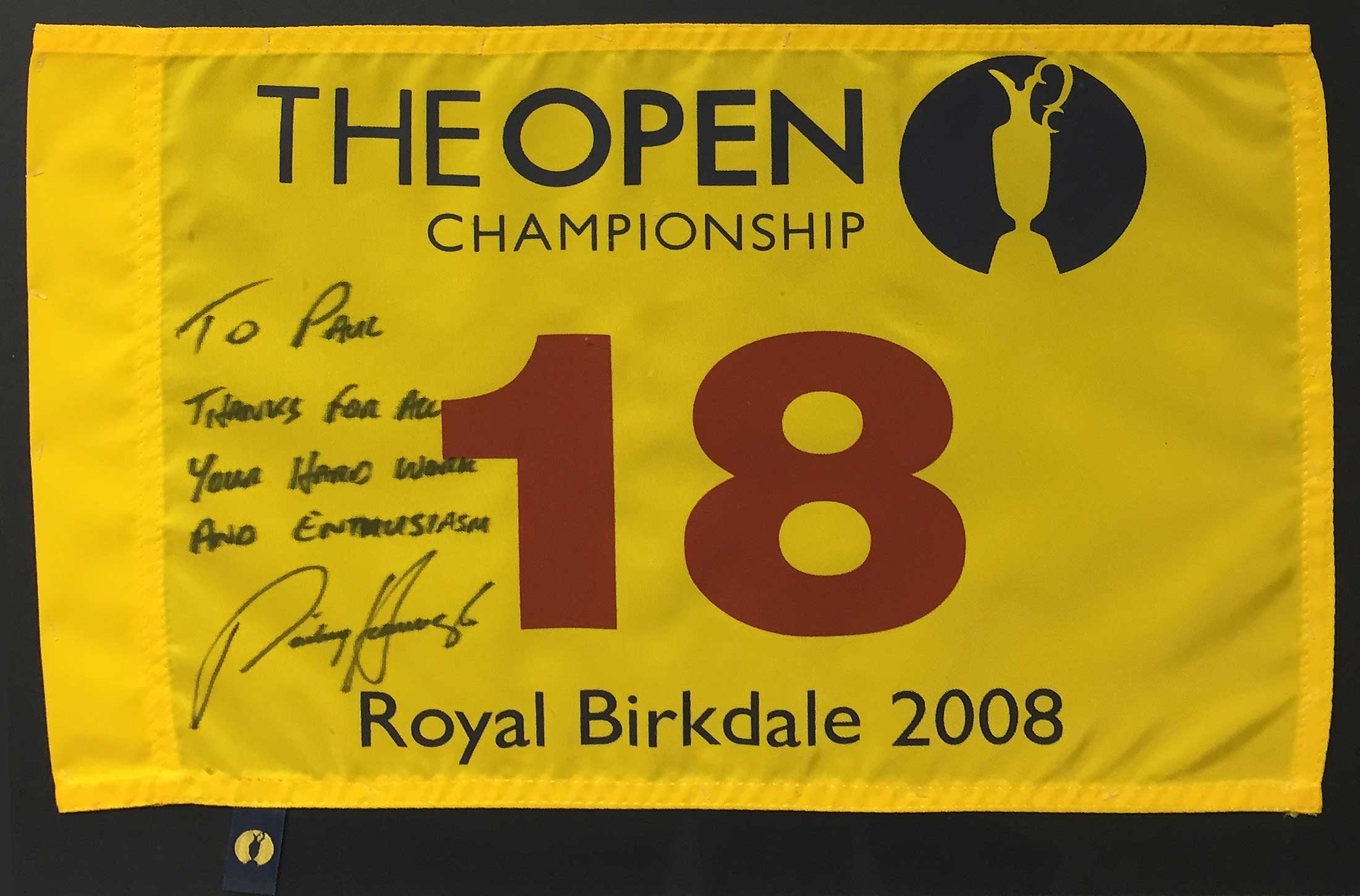 A strong, gusty wind will certainly try your patience. And if you allow yourself to get annoyed, it will only make matters worse. Even a fairly low wind velocity can affect putting. In his seminal book,  The Putting Bible (2000), Dave Pelz reports a 5mph crosswind (at green level) can cause a perfectly rolled nine-foot putt to move enough to miss the hole. However, without experience, how are you going to know if you have pulled the putt, rather than the 5mph wind blowing the ball outside the left lip? The effect is also there into or down wind! It is only through experience that you learn how hard to hit the putt, or is there a scientific way to approach it?

I have recently undertake testing in a laboratory environment – in order to control the controllable. I have often wondered what effect wind has on putting, and what speeds those affect may occur? Using our flat green in the Quintic laboratory (stimp 15, yes 15!) I set up a number of desk fans at 90 degrees to the path of the ball. The fans were arranged so they created a consistent, uniform 7mph wind on the surface of the putting green (measured by an anemometer) over a 6 x 2 metre area.  The following graph is the average position of ten putts hit at 1.5, 2, 2.5, 3, 4 & 5 mph ball speed.

The location of the ball was tracked using an ‘overhead’ high speed Quintic camera (250fps) throughout the path of its journey. Whilst the ball still has close to its original impact velocity, there is minimal effect to the vertical distance. However as the ball slows down, so the effect of the wind increases, almost pushing the ball further away from the intended target. It is interesting to note that the ball actually travels a shorter (displacement) with the 7mph cross wind, then the no wind condition (even on a flat surface)! 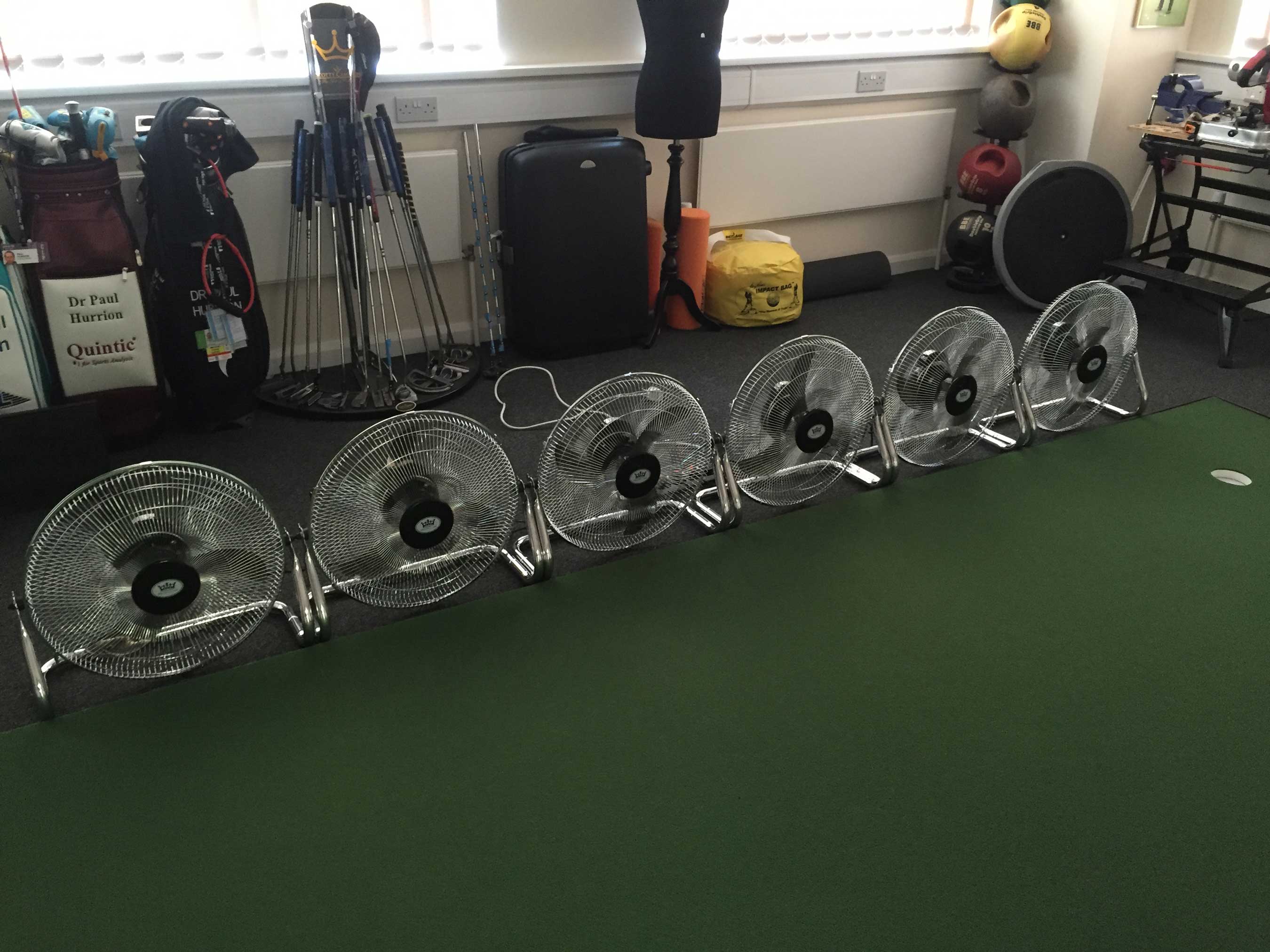 
A wind of 7mph at ground level is not strong enough to move the ball on its own accord; in those conditions you would still be happily playing golf even on a green stimping 13. In fact, the wind at six feet in the air is approximately 15-20mph which is nothing untoward on a links.

The force required to move a static ball (static friction) on the putting green is considerably higher than that required to keep the ball rolling (once it has already started – rolling friction). This is why a 7mph wind, even on a green stimping at 15 isn’t strong enough to move the ball at rest… however once rolling the 7mph wind has a significant effect on the ball’s path.

Just think of a strong man competition pulling a truck: the initial effort to overcome the static friction is huge, but once the truck is moving, it is much easier to keep it moving.

Impact propels the ball forward, air resistance (albeit small) and green friction slows the ball down. The faster the surface, the lower the amount of friction and the more susceptible the ball is to wind and slope. Both wind forces and slopes (gravity) move the ball sideways, the question is how far.

Remember that everyone on the course is in the same boat. However, those with a good attitude will cope better with the conditions than those who complain, and get frustrated with the effects of the weather. You still have to have the ability to start the ball on your intended line. I would always recommend you read the putt first, as you normally would do BEFORE you start to factor in any effect of wind on the ball.

On every putt, it is from the point at which the ball begins slowing down that you will witness the most significant effect of the wind. I will be continuing my ‘wind’ research to look at different direction of wind, into, down, across from different angles – and of course on different surfaces – in a bid to shed more light on the reality.

Finally, don’t shy away from the challenge when the wind’s up – get out there and experiment with your set-up and putting stroke and experience the effects of wind. This preparation will be invaluable when you most need it.

Who said putting was easy!