A putt hit with the perfect line and initial start speed might still miss the hole due to varying amounts of skid, roll and launch angle. The following study investigated the variation of launch characteristics during putting to determine how these differences affect the outcome of ball speed. Speed has a significant effect on putting results and should be considered an important factor when putting at any level (Pelz, 2000). Despite this, the ability to control ball speed can often be overlooked and focus in coaching and performance predominantly aims to control the speed of the putter head. Aim and green reading are the primary determinant of putting direction consistency (Karlsen et al. 2008), however little or no focus is aimed towards ‘clubhead twist’, centre contact or even the launch characteristics of the golf ball. The purpose of the study was to better understand a player’s ability to control ball speed and distance control, despite their normal variability in putter head speed by changing launch and spin conditions.

The Quintic Ball Roll system uses a high speed camera (360fps) to measure a variety of factors including ball speed, roll, spin, launch and skid during the first 16 inches of a putt. Ten putts were performed by an elite professional (Top 60 World golf Rankings – Sept 2015) outside on a flat green (0% slope; Stimp 11). The putt distance was 12ft and each putt was recorded individually using the Quintic Ball Roll system. Speed control of the participant was paramount, therefore the participant selected is widely considered to be one of the best ‘pace putters’ in the world. The data collected by Quintic Ball Roll was mathematically modelled using AimPoint software, a green reading tool that helps to understand break speed and aim by assuming true roll over the entire length of the putt. All 10 putts were simulated across different angles (12 angles around the clock face over 30 degree increments) and three different slope percentages (1%, 2% and 3%) to determine the outcome of the ball. The modelling used a surface stimping at 11.

Table 1 shows the raw data collected for each of the ten putts on the flat surface. The range in ball speed at 0 inches was 0.28 mph (5% variance from the mean) and this increased to 0.41 mph at 16 inches (14% variance from the mean). Due to differences in launch angle, roll and skid, this equates to a further difference of 0.56 mph between the fastest and the slowest putt by the time the golf ball reached true roll (zero skid). AimPoint software was used to quantify exactly how much a range of 0.41 mph might change the outcome of a putt given the same start direction. Figure 1 highlights the results of what percentage of putts would still go in the hole, based on the gradient and angle. The red lines indicate a miss, blue indicate holed and black is the average putt line. When putting using the 3% slope, 60 degree down, there was over a 3ft variation in the finishing distance between the fastest and slowest putt. 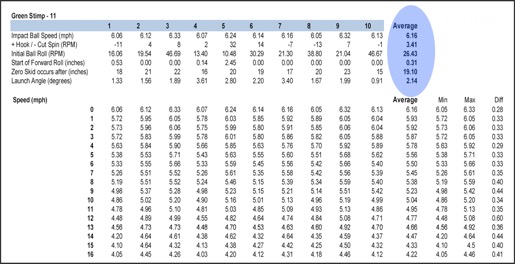 The results clearly show that as the slope gets steeper the variance in launch characteristics accentuates the variance in ball speed, causing the ball to slow down at difference rates. The participant tested had world-class speed control with only a 0.24 mph variance across 10 putts, however a greater variance will accentuate this even more. The results also showed that smaller uphill angles are more forgiving of speed variances than cross-hill or downhill angles. From a strategic perspective, it should be obvious where the ideal position to putt from is and from a performance perspective it is important to understand that having consistent launch conditions can have a big effect on distance control. Despite this, some natural variance in speed must be expected (golf is an outdoor sport), and when facing a steep fast downhill putt, it is dramatically harder to make than the equivalent uphill putt (Wesson, 2008 & Holmes, 1991). This brings implications to players of all abilities and probes the question should golfers be more concerned with finishing a certain distance past the hole or optimising the effective size of the hole to give them the best chance of putting.

Putting is a game of percentages – be sure you know where the odds lay in your favour. Given that the golf ball can lose up to 30% of its initial speed before it gets to true roll, identifying this point is clearly important for a player to be consistent on the putting green. From a coaching perspective, a player needs to be able to consistently control ball speed, along with launch, spin and roll values in order to achieve a consistent end distance. A consistent strike point is also required for this to occur. The authors would also stress, that the golfer in question is inside the top 60 in the world ranking (September 2015) and in their experience don’t believe a human can be much more consistent with ball speed immediately after impact.